Home / Articles / Cardinal bird in the US overview

Cardinal bird in the US overview 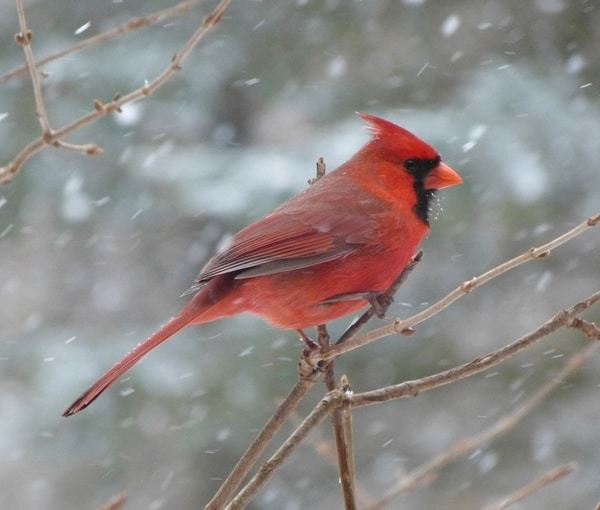 What are the Cardinals?

The northern cardinal is one of the most favorite birds in the world. It has been named the official bird of no fewer than seven U.S. states. In general, cardinals are easily identified because of their feather colors.

Cardinals also called “redbirds,” are fairly large birds. They are between 12 – 22 centimeters and weigh between 11 and 85 grams depending on species. They have strong beaks for crushing seeds, long tails, and prominent crests. Cardinals tend to sit in a hunched over position with their tails pointing towards the ground. These birds’ diet often includes insects, seeds, grain, fruit, and sap.

Male and female cardinals are also different in color. Only males sport the brilliant red plumage for which their species is known. Besides, Male cardinals have black ‘mask-like’ faces that extend from the eyes to the throats and thick red beaks. The color is the key to mating success—the brighter the better.

On the other hand, Female cardinals are an attractive tan/gray. They and their young have a brown- buff coloring with hints of red on their wings, crest, and tail.

Cardinals are active songbirds. Different from most bird species, the cardinals sing all year long and they can sing a variety of different melodies. It is not uncommon to see them perching on a tree branch and raising their voices.

These animals are fairly social. They even join in flocks that may include birds of other species. During mating season, however, groups are dissolved into pairs. Cardinals live monogamously.

Though both males and females Cardinals care for the nestling, males contribute more food and tend to feed their partners. A female can brood from four to six pale green eggs. Typically, these creatures incubate clutches of four eggs per year.

Male Cardinals can be aggressive when defending territory as they frequently attack intruders. This tendency sometimes leads them to bump into glass windows. They think that the ones they saw are “intruding birds”. Yet, it simply is their own reflection.

Cardinals prefer habitats in open woodlands, shrubbery, forest edges. They often build their nests in dense, tangled vines and shrubs. You can also find some in parks, backyards, or throughout areas where there are thickets or heavy bush.

Cardinals do not migrate. They are found in a warmer climate like the southeast U.S. However, in recent decades they have expanded northern areas, through the United States and even into Canada.

This population growth may be due to an increase in winter bird feeders and the bird’s ability to adapt to human habitats.

If you are interested in this lovely bird, don’t hesitate to add a Cardinal pop-up card to your Bird Collection. This paper pop up card will be a lovely present for kids or an ideal new year pop up card for your friends and family.

PreviousAbout Us
NextWhy the Cardinal bird is Cut popup's symbol?